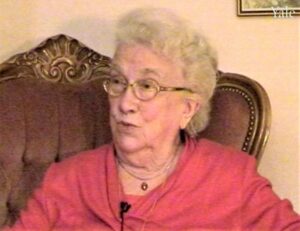 Clémentine Lucas was born in Hasselt, Belgium in 1914, the youngest of six children. She recalls working in an office from age sixteen to nineteen; marriage in 1924; the births of a daughter and son in 1936 and 1937; her husband's mobilization in 1940; German invasion; fleeing with her family to Harelbeke; returning home; her husband's return; his immediate work for the resistance; traveling to Brussels to obtain resistance flyers; working with a network to shelter Allied pilots and send them forward; obtaining ration cards and identity papers for them; arrest with her husband on June 18, 1943; imprisonment in Assen and St. Giles; a death sentence from a Luftwaffe court; separation from her husband upon transfer to Frankfurt on November 15; incarceration in Ziegenhain, then Cottbus; hospitalization; a nurse providing her with extra food; transfer to Ravensbrück; the birth of a child whom they hid; witnessesing a woman being stomped to death; transfer in January 1945 to Mauthausen; a privileged job cleaning SS offices; evacuation in April by the Swedish Red Cross; repatriation via Annecy and Lyon; reunion with her children on May 1; and learning her husband had been killed. Ms. U. discusses the humiliation in camps; attributing her survival to strong bonds among prisoners and the hope of seeing her husband; attending mass in St. Giles and Cottbus in order to meet friends; not sharing her story with her children until they were older; continuing nightmares; and participation in survivor groups, including speaking to classes and trips to the camps. She shows her camp number and triangle.