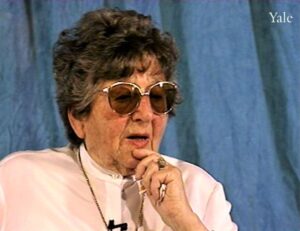 Rebecca Liwschitz was born in Antwerp, Belgium in 1908, one of ten children. She recalls her family spending World War I in London; the births of two siblings there; returning to Antwerp; working as a diamond cutter starting at age sixteen; marriage in 1933; her sister's incarceration in Wurttemburg in 1941 as an English citizen; some family members hiding, while others were deported; her husband encouraging her to join the resistance; arrest in 1943; imprisonment in Antwerp, St. Gilles, Luxembourg, and Aix-La-Chapelle, (presently Allach); singing resistance songs to maintain morale; kindness from a guard; and deportation to Auschwitz. She describes crying upon hearing of the gas chambers and never crying again; learning of the deaths of her father and brother; work assignments in Birkenau including the Canada Kommando; protection by friends; Mala Zimetbaum's escape, capture, and public hanging; the death march to Ravensbrück in January 1945; forced labor in several German camps; friends carrying her when she could not walk on the last death march; liberation by Soviet troops in Ries; reunion with surviving family in Brussels; and her divorce. Mrs. L. shows photographs; sings partisan songs; and lists many relatives who were killed.