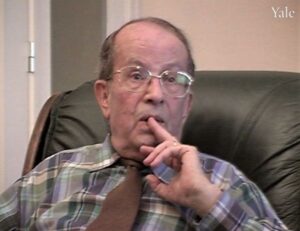 Georges Nagels was born in Strombeek-Bever, Belgium in 1920, the youngest of three children. He recounts his father's military career; his family's antipathy toward Germany; attending Catholic school; enlisting in the military in 1938; passing exams in Brussels to become an officer; German invasion in May 1940; retreat, then surrender; being marched to Aachen; train transfer to Oberlangen (Stalag VI C), then days later to another stalag; receiving food from the Red Cross; forced agricultural labor in Altenburg; transfer to Stalag XVII A; corresponding with his parents; learning of his mother's death; refusing to work by invoking the Geneva Convention which stipulated officers could do so; transfer back to Oberlangen; witnessing Germans shooting Jews; a march to Stalag 369; evacuation to another Stalag in August 1944; liberation by United States troops; returning home via Munich, Taverny, Lille, and Tournai; assistance from the Red Cross; reunion with his family; and marriage in 1948. Mr. N. details life in Stalags including theatrical productions; participating in a chorus; clandestine celebration of mass; relations between national groups; prisoner hierarchies; hospitalization; starvation; lack of sanitary facilities; and comraraderie among prisoners. He discusses depression and poor health resulting from his experiences; protesting with other POWs in 1947 to receive benefits; continuing friendships with fellow prisoners; and visiting camps in which he had been imprisoned.