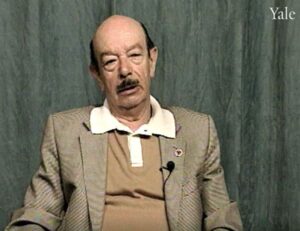 Felix Najman was born in Łódź, Poland in 1926, one of three children. He recounts attending public school and cheder; antisemitic harassment; attending summer camp in Piotrków Trybunalski; his bar mitzvah; working in his father's tailor business; German invasion in September 1939; ghettoization; hiding during round-ups; public executions; working in a factory; deportation with his family to Auschwitz/Birkenau in summer 1944; separation from his sister and mother (he never saw them again); meaningless slave labor; transfer to Gross-Rosen three weeks later; slave labor constructing railroad tracks; assistance from a German soldier; his father's death en route to Mauthausen; slave labor building an underground factory; transfer to Ebenesee; his brother's killing; a Russian prisoner giving him cooked meat and informing him afterward that it was human flesh; abandonment by the guards; liberation by United States troops; hospitalization; traveling with a friend to Brno; assistance from the Red Cross; living with a Jewish couple in Prague; working as a tailor; joining a group for illegal emigration to Palestine in 1946; assistance from UNRRA; meeting relatives in Paris during the group's journey, then an uncle and aunt in Belgium; deciding to remain there; working as a tailor; marriage in 1951; and the births of two daughters. Mr. N. discusses many details of camp and ghetto life; numbing himself to deaths and atrocities; continuing despair and nightmares after liberation; his loss of faith in God, though maintaining his Jewish identity; attributing his survival to luck and help from others; not sharing his experiences with his wife or daughters; speaking at schools; and visits to Auschwitz. He shows photographs, documents, and his Mauthausen identification bracelet.
Conditions Governing Access This testimony is open with permission.
Conditions Governing Use Copyright has been transferred to the Fortunoff Video Archive for Holocaust Testimonies. Use of this testimony requires permission of the Fortunoff Video Archive.