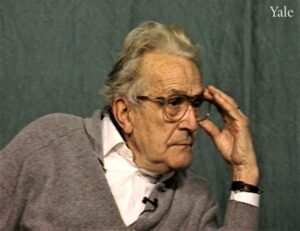 Jean-François Nothomb was born in 1919 in Hasselt, Belgium. He recalls his family's upper-class background; their monarchist and Catholic focus; his own Rexist sympathies; turning away when the Rexist pro-German stance became known to him; military service from 1937 to 1938; recall in 1939 when war started; capture during German invasion; incarceration in a POW camp in Germany; solidarity with Belgians; volunteering to work; good treatment from local Catholics; regular correspondence with his family; escape and recapture; escape again; observing Jews with a yellow star in Kassel, a transformative experience; smuggling himself back to Belgium; moving to Brussels; joining an underground unit in Paris moving Allied pilots to Spain; denunciation and arrest of everyone in the unit but him; restarting with others; trips to Madrid and Gibraltar; arrest in January 1944 en route from Brussels to Paris; imprisonment in Brussels and St. Gilles; transfer to several German prisons; saying mass every morning with fellow prisoners; liberation by United States troops; return to Brussels; reunion with his family; and sixteen months recuperating in Switzerland. Mr. N. discusses the growth of his faith due to his war experiences; becoming a monk, then a priest; and wartime colleagues and incidents.