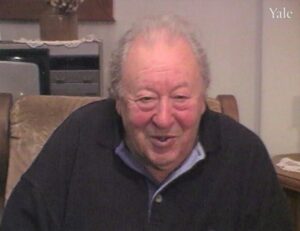 Abraham Nejszaten was born in Sierpc, Poland in 1921, the youngest of three children. He recounts his family's move to Antwerp in 1926; his parents' orthodoxy; their poverty; attending a Jewish school; participating in Mizrahi and Yiddischer Arbieter Sport Klub (YASK); apprenticing as a dental technician at age fourteen; joining Maccabi and the Communist party in 1939; German invasion in May 1940; being evacuated to southern France; expulsion from a Belgian refugee camp in Rouens due to his Polish citizenship; living in Segur; returning home a few months later; anti-Jewish laws; joining the Belgian Resistance with his brother; distributing pamphlets; moving to Brussels, then Charleroi; obtaining false papers in Seraing; working for a furrier in Brussels; living with his future wife and another Resistant; assignments to blow up homes and assassinate collaborators, sabotage trains, rob banks and post offices to obtain Resistance funds, and arrange escapes of arrested Resistants; efforts to merge the Jewish and Belgian groups; and arrests in 1942 of his future wife and her parents (they were killed).