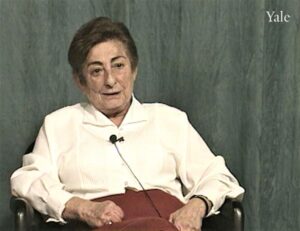 Zoé Radnaï was born in Cluj, Romania in 1925, an only child. She recounts her parents' divorce when she was three; attending the school of a Neolog synagogue; participating in Hashomer Hatzair; Hungarian occupation; antisemitic legislation; German invasion in spring 1944; round-up with her mother to a building with thousands of other Jews; deportation to Auschwitz/Birkenau; separation from her mother (she never saw her again); fellow prisoners holding her when she fainted during an appell; frequent selections; transfer to Frankfurt; slave labor for Organisation Todt; brief hospitalization; transfer six weeks later to the Ravensbrück tent camp, then Zillerthal; slave labor in a textile factory; receiving sugar from the Red Cross at Christmas; transfer to Nordhausen; slave labor in a munitions factory; sabotaging production; writing poetry; a death march to Morgenstern; escaping with four others; a German soldier bringing them food; capture by a SS man; escaping again; liberation by United States troops; convalescing on a farm; traveling to Namur; living in Jambes, Dave, and Brussels; learning an uncle had survived; marriage to a survivor; the births of two children; and learning her father was in Israel. Ms. R. discusses sharing her experiences with her husband in front of their children; pervasive painful memories and nightmares; visiting Cluj in 1962, of which she has fond memories despite not receiving help from the non-Jews there; and her husband's death at a young age.