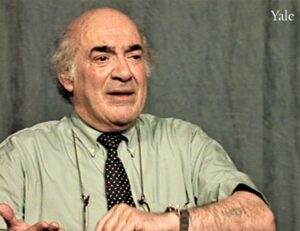 Tobias Schiff was born in Tarnów, Poland in 1925, one of two children. He recounts his family's move to Antwerp in 1926; attending a Jewish school; a one-year visit with relatives in Poland in 1935; attending a Jewish school there; attending a Talmudic high school in Belgium; German invasion; fleeing with his family to France; returning after encountering German soldiers; anti-Jewish restrictions including closing of his school and wearing the star; his sister's disappearance (he never saw her again); illegally traveling with his parents to Paris, then south using false papers; their arrest in Bourges; transfer to Pithiviers, then Drancy; deportation in August 1942 to Koźle; separation from his mother (he never saw her again); slave labor in Sakrau building highways; becoming very close to his father; starvation suppressing all other thoughts; transfer to Spytkowice and Trzebinia in winter 1943; separation from his father; assistance from a man from Antwerp when he lost hope; his father assisting him when he became ill; an opera performance giving him hope; moving to his father's barrack; his father buying extra food from Polish civilian workers which helped them survive the cold and starvation; a German transferring him to a privileged position; sharing extra food with his father; transfer in November 1943 to Birkenau; learning of the gas chambers; losing hope his mother and sister were alive; his father's selection for killing in January 1944; transfer to Buna/Monowitz in March; a German prisoner providing him with extra food; encountering British POWs; several privileged positions; assisting a cousin; a death march then train transport to Dora in January 1945; slave labor making V1 rockets; public hangings; transfer to Bergen-Belsen; encountering his cousin again; liberation by British troops; and repatriation. Mr. S. discusses his father's strength in the camps; the inability of language to convey starvation; pervasive painful memories; losing his belief in God; sharing his experiences with his children; traveling with three of them to Auschwitz; speaking at schools; and his belief that nothing is learned from history. He shows a photograph.