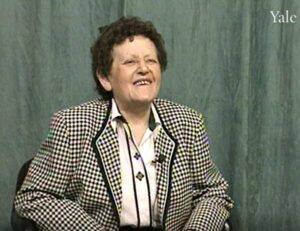 Paula Schumiliver was born in Antwerp, Belgium in 1912. She recounts her family's evacuation to England during World War I; returning home; their poverty; her father's death; one sister emigrating to England (she had been born there); participating in communist youth activities; German invasion; organizing anti-Nazi activities; joining the partisans; defying anti-Jewish restrictions; her mother's and sister-in-law's deportations (she never saw them again); hiding using false papers; arrest; imprisonment in Antwerp and St. Gilles; transfer to Breendonk, then Malines; not revealing information about the resistance during torture; her trial in Essen; a six year sentence; imprisonment in Mesum; transfer to Gross Strehlitz, then Ravensbrück; the shock of the horrendous conditions; assistance from political prisoners; slave labor; bonding with French and Belgian prisoners; transfer to Binder, then Langenhorn; liberation by the Red Cross; transfer in May to Denmark, then Sweden; hospitalization; transport to Brussels in July; assistance from the Red Cross; reunion with her brother-in-law and niece; marriage to a camp survivor; continuing friendship with fellow survivors; and recent involvement in the Ravensbrück association and Jewish organizations. Ms. S. discusses details of camp life; the difficulty of surviving; her state of mind in camps; and inter-group relations.