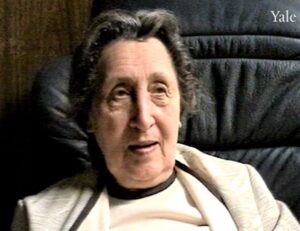 Emiliana Smets was raised in Mechelen, Belgium. She recounts attending middle school when the Germans invaded; she and classmates forming a group to distribute clandestine anti-German publications; arrest with many from the group on June 17, 1942; imprisonment in Antwerp; transfer to Aachen, Essen, then Zweibrücken a few months later; transfer to another camp, then Esterwegen; placement in solitary confinement as was her friend; a trial and two-month sentence; transfer to Gross Strehlitz, then Esterwegen; slave labor weeding and harvesting produce; eating some of the food they harvested; transfer to Ravensbrück; singing to raise morale; the oppressive feeling there; solidarity with those in her block and other Belgians; transfer a few weeks later to Mauthausen; slave labor in Amstettin clearing bombing rubble; liberation by United States troops; assistance from the Red Cross; transfer to St. Gall; and repatriation. Ms. S. discusses the difficulty of telling parents whose children were deported with her that they had not survived; continuing friendship with the woman who survived with her; occasional nightmares resulting from her experiences; and sharing her story with her daughter on a visit to Austria.