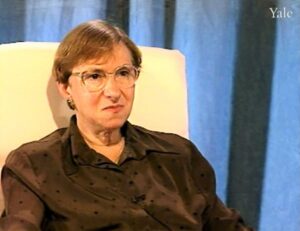 Betsy Sobol was born in Brussels, Belgium in 1928. She recounts that her parents were Polish immigrants; German invasion in May 1940; her father continuing his business until 1942; meeting her future husband who was involved in the Resistance; going into hiding with her family; their arrest in June 1944; incarceration in Malines; deportation to Birkenau; separation from her father and brother (they did not survive); the trauma of not recognizing her mother after they were shaved; singing French songs while marching to Auschwitz; separation from her mother (she did not survive) when she was transferred to Wilischtal; sabotaging her work in a munitions factory; receiving extra food from German civilian workers; being forced to watch a prisoner publicly beaten to death; evacuation to Theresienstadt in April 1945; receiving Red Cross packages; liberation; transfer to Prague by the Red Cross; and repatriation to Namur. Mrs. S. notes the importance to her survival of being with one friend; fears, loneliness, and continuing sadness resulting from her experiences; and reluctance to discuss these years with her husband and her children.