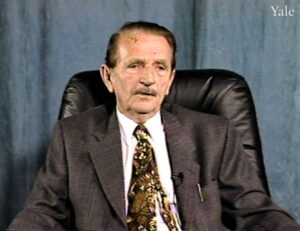 Marc Souka was born in Mons, Belgium in 1922, one of five children. He recounts growing up in Liège; German invasion in May 1940; illustrating and distributing anti-Nazi literature; hiding a downed Allied aviator; traveling to Charleville, France in October 1942, intending to go through Spain to join the British military; obtaining false papers as a French citizen; traveling to Villers-Farlay; joining a group to enter Spain; their capture; imprisonment in several towns ending in Dijon; transfer to St. Gilles; his mother's visit; deportation to Dachau in early 1943; a Jew in his group passing as a Belgian non-Jew (they helped each other often); slave labor cultivating medicinal plants, then in a munitions factory; making drawings for Dr. Sigmund Rascher; assignment to a privileged position in a porcelain factory with assistance from Rascher; receiving extra food from civilian workers; transfer to a Messerschmidt factory; sabotaging the work; public hanging of a fellow prisoner for the sabotage; assignment to the kitchen; sharing extra food; occasional letters from his parents; Catholic priests (Polish prisoners) celebrating mass; soccer games and recitations on Sundays; helping a friend escape, disguised as a woman; liberation by United States troops; killing German soldiers; repatriation in May 1945; reunion with his parents; marriage; moving to the Belgian Congo in 1945 as a medical worker; and returning to Belgium in 1961. Mr. S. discusses relations between prisoner groups; suffering most from cold and hunger; total dehumanization; the importance of humor in maintaining morale; and his children's interest in his experiences.