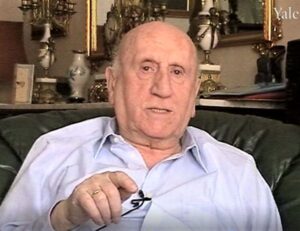 Jaak Springer was born in Antwerp, Belgium in 1917, one of two brothers. He recounts his father's death when he was seven; a totally assimilated lifestyle; visits to his maternal grandparents in Leipzig; his older brother mentoring him; attending school to be a diamond cutter; working with his mother (she had a boarding house/restaurant/public bath), and in his uncle's diamond business; military service in the mid-1930s; recall when Germany invaded in May 1940; ruining as much ordnance as they could when defeat was imminent; surrendering at Bruges; arrest en route home for not wearing his uniform; imprisonment for four weeks; his mother and brother hiding; joining the Resistance in Liège; marriage in summer 1943; arrest three weeks later; imprisonment in St. Leonard, then transfer to Auschwitz via other locations in Germany and Poland; his designation as a political prisoner, not a Jew; transfer to Buna/Monowitz; slave labor in several privileged commandos; receiving packages from his wife and the Red Cross; sharing extra food with others; singing with Italian prisoners (he sings one song); public hangings; the death march in January 1945; escaping with others; liberation by Soviet troops; repatriation via Warsaw, Odesa, and Naples; and reunion with his wife and mother. Mr. S. discusses attributing his survival to speaking German; his designation as a political prisoner, but primarily to luck; absence of prisoner solidarity; and seldom speaking of his experiences until recently. He shows photographs and documents.