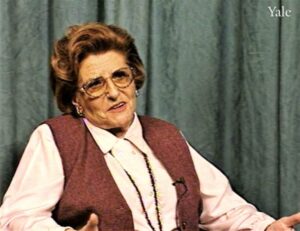 Amanda Stassart was born in Lausanne, Switzerland in 1923. She recalls living in Brussels; attending school in Paris; German invasion; briefly fleeing with her father to Limoges; her father hiding after refusing to cooperate with Germans; hiding Jewish friends; being recruited to hide Allied pilots; living under false papers; arrest in February 1944; observing her mother's arrest (two pilots and two Jews were found in her home); incarceration in Fresnes; torture; three months' solitary confinement; prisoners communicating through the plumbing; brief transfer to Romainville; deportation to Ravensbrück in April; slave labor, starvation, and beatings; not receiving packages because she was "Nacht und Nebel"; being subjected to medical experiments from which many died; hospitalization; her mother's death; train transport to Linz; a death march to Mauthausen; carrying her friend; a French man providing her with extra food which helped her survive; liberation by United States troops; assistance returning home from the Red Cross; staying at Hotel Lutetia; learning her father had been killed; placement in a sanitarium for six months in Chamonix; and her career as a flight attendant. Ms. S. discusses group relations in the camps; her mother's efforts to raise prisoner morale; not discussing her experiences until recently; and nightmares about her father.