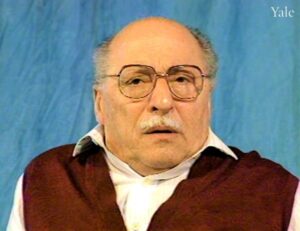 Richard Sufit was born in Paris, France in 1925. He recalls moving to Brussels in 1928; participating in socialist groups; repatriation to Béziers, France in 1940; returning to Brussels; registering as a Jew in 1941; support from socialist friends; his sister hiding with a Belgian family; destroying orders for the family to report to Malines; returning to Béziers in 1942; his parents' deportation from Brussels shortly thereafter; working as a resistance courier; a brief association with the Maquis; arrest and brutal interrogations in 1944; and transfer to Compiègne, Paris, Drancy, and Auschwitz. Mr. S. recounts assignment to Monowitz; learning of his parents' deaths; contact with Allied prisoners of war; resistance activities; sharing food with his small group; watching religious Jews pray; the death march to Gleiwitz; transfer to Buchenwald; surgery for a leg infection; the underground liberating the camp in April 1945 shortly before United States troops arrived; hospitalization in Kaiserlautern, Metz, and Brussels for over a year; and reunion with his sister. Mr. S. discusses his state of mind and relations between ethnic groups in the camps; dealing with traumatic memories; his sense that survivors are different; and discussing his experiences with his children.