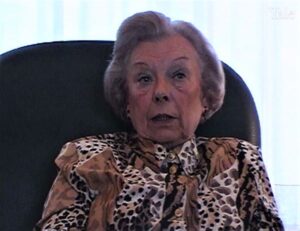 Octavie Van Gaever was born in Antwerp in 1924, an only child. She recalls being a championship swimmer; German invasion; fleeing briefly with her family; observing discrimination against Jews, including wearing the star and disappearances; engagement to a swimmer; becoming a courier for the underground (her parents and relatives were involved); arrest on November 26, 1943 with her mother, fiance, and his family; solitary confinement until her father's arrest, then sharing a cell with her mother; learning she was pregnant; being forbidden to marry due to their classification as political prisoners; transfer to St. Gilles; train transport to Cologne two days later with her mother, fiance, his father and sister; placement in a women's prison with her mother and fiance's sister; their transfer a week later to Gross Strehlitz; categorization as Nacht und Nebel; sharing a cell with her mother and fiance's sister; slave labor; Polish prisoners throwing her food; her son's birth; a physician repairing her injury from childbirth; solitary confinement with her son; sabotaging sewing she was assigned to do in her cell; the Polish prisoner cook giving her extra food; arrival of three French prisoners with their children; evacuation of the camp on January 19,1945, including her mother; encountering two Belgian prisoners of war; joining a convoy of French and Belgian POWs on January 27 with the French women and children; a four-day walk to Częstochowa; two of the French children dying; transfer to a Russian village in late April, then to Odesa in early June; train transport to Berlin on July 15; transfer to United States authorities; assistance from the Red Cross; transport to Herentals; arrival in Antwerp on July 20; reunion with her mother and aunt; learning about concentration and killing camps and that her father and fiance did not survive; and marriage in December to one of the POWs who liberated her in Gross Strehlitz. Ms. V. notes the importance of her mother, her son, and luck to her survival; continuing close relations with fellow prisoners; always discussing their experiences together; and anxieties and physical ailments resulting from her experiences.