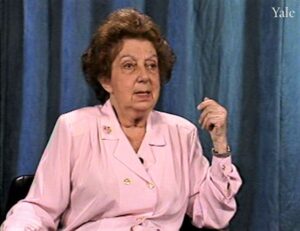 Renée Van Hasselt was born in Brussels, Belgium in 1913. She recalls her secular childhood; her avowed atheism despite her Jewish ancestry; participating in anti-fascist activities; marriage; German invasion; briefly fleeing to France; returning to Brussels; arranging hiding places for her parents and husband's parents; continuing to teach; quitting to devote full time to the Resistance; arrest with her husband in July 1943; incarceration in St. Gilles; torture during interrogations; transfer to Vught via Cologne; slave labor for Philips; sabotaging the work; deportation to Auschwitz/Birkenau in June 1944; briefly seeing her husband; transfer to Langenbielau; slave labor for Telefunken; a death march in January 1945; staying briefly in several camps; liberation by the Red Cross near Hamburg in April; recuperating in Sweden; returning to Brussels; and reunion with her husband and parents. Mrs. V. notes some prisoners stole from each other and others shared; relations between national and political groups in camps; her high morale because she believed she was incarcerated for her Resistance activities, not simply because she was a Jew; reluctance to discuss her experiences, thinking no one would believe her; and eventually sharing some of her story with her son and students.