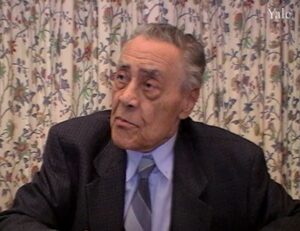 Fernand Van Horen was born in Ndjoko-Punda, Congo in 1909, one of three children of a Belgian man and a Congolese woman. He recounts his father's death in approximately 1911; his father's family bringing him to Belgium without his mother's permission (he never saw her or his siblings again); living with his father's sister in Uccle; German invasion in World War I; attending school; racist harassment; enlisting as a reserve cavalry officer; studying art; working in a bank and as a newspaper illustrator; marriage in 1937; his daughter's birth; military mobilization; German invasion; Belgian capitulation when his unit was in Bruges; demobilization; returning to Brussels; his son's birth in 1941; joining the underground; denouncement; hiding for two weeks; arrest in February 1943; solitary confinement in St. Gilles until September; receiving packages from his wife, including sketchbooks; drawing constantly; transfer to Essen, Esterwegen, then Bayreuth; forced labor; celebrating Christmas with other Belgians, including priests; transfer to Flossenbürg in March 1945; a privileged assignment drawing for a high-ranking prisoner; encountering Jewish prisoners; hospitalization; abandonment by the Germans; liberation by United States troops in April 1945; repatriation two weeks later; and reunion with his wife and children. Mr. V. discusses his strong faith and optimism; relations between prisoner groups; postwar meetings with other prisoners; not sharing his experiences with his children; visiting German camps with his wife; and the beautification of these sites creating a false impression. Mr. V.'s wife joins him at the end of the testimony and he shows his wartime drawings.