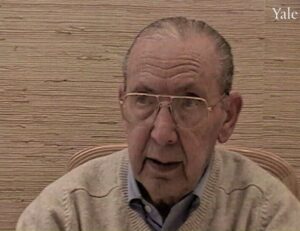 Léo Weinblum was born in Kellersberg, Germany in 1923, the youngest of three children of Polish immigrants. He recounts his family's move to Liège when he was three months old; cordial relations with non-Jews; his father's death in 1936; apprenticing as a tailor immediately after, German invasion; fleeing with his mother, sister, and her children to Toulouse; remaining there with his mother for ten months; returning to Brussels; anti-Jewish restrictions; working in a factory, hoping to avoid deportation; deportation in August 1942 to Dannes-Camiers, being told three months service there would save his family; slave labor for Organization Todt; sadistic treatment by the guards; transport to Malines for a day in 1943; escaping from the train; walking to Tongeren; assistance from a local woman; returning to Liège for a day (his family were all in hiding); a non-Jew taking him to join his mother in hiding with non-Jews in Vaux-sous-Chèvremont; remaining indoors for two years despite having false papers; liberation by United States troops; marriage to a survivor; and the births of two children. Mr. W. notes his brother did not survive Auschwitz; continuing contact with the family that hid him and his mother; obtaining posthumous recognition of them by Yad Vashem (they had refused during their lifetimes); sharing his experiences with his children; and visiting Dannes-Camiers with his wife in the 1990s. He reads letters from school children with whom he has spoken about his experiences.