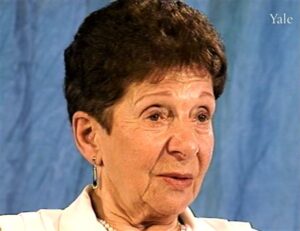 Sonia Wassersztrum was born in ?ochów, Poland in 1912, one of ten children. She recalls working in Warsaw starting at age fifteen; moving to a hakhsharat from 1932 to 1933 to prepare for immigration to Palestine; increasing antisemitism; returning to ?ochów; emigrating to Brussels in 1938 (she never saw her family again); joining a Jewish socialist organization; a mock marriage to obtain Belgian citizenship; joining the Resistance; arrest; incarceration at Malines; deportation to Birkenau; useless slave labor; transfer to Canada Kommando; slashing clothing she sorted; close bonds with a group of Belgians; smuggling clothes to friends; the Sonderkommando revolt; a woman giving birth (the baby was killed to save everyone); public hanging of four women who stole explosives; the death march to Leipzig, Malchow, Ravensbrück, and Bunzlau; assistance from friends when she had typhus; obtaining extra food doing farm work and from Red Cross packages; being saved from execution by a guard; liberation by Soviets troops; recuperating in a Red Cross camp; repatriation to Liège and Brussels; and meeting her future husband. Mrs. G. discusses group solidarity and its importance to survival; feeling she had lost everything; sharing her experience with her son; and difficulty believing it happened. She shows photographs.