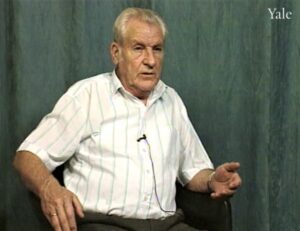 Raymond Weynans was born in Brussels, Belgium in 1923. He recounts participating in a Communist youth group; his family housing refugees from Germany; disrupting Rexist meetings; German invasion; being wounded in an air raid in Boulogne en route to enlist; hanging anti-German posters in the streets; returning to Brussels; joining the resistance; helping to sabotage production and organize strikes; hiding belongings of Jewish deportees to prevent appropriation by Germans; warning Jews to go into hiding; his mother compelling him to volunteer to work in Germany in 1941 to help obtain food for the family; one sister going as well; her accidental death; assignment to a Todt factory in Berlin; sabotaging production; returning to Brussels six months later; his mother and relatives participating in the underground; arrest in April 1943; incarceration in St. Gilles; transfer to Natzweiler-Struthof in September; slave labor in a privileged commando due to the influence of Communists; transfer to Frommern; prisoners from Luxembourg receiving packages and sharing them with others; assistance from German civilian workers; a death march in May 1945 to Mittewald; abandonment by the guards; liberation by United States troops; returning home via Lille and Tournai; hospitalization; and continuing his communist activities. Mr. W. discusses testifying at a war crimes trial, and the importance of prisoner solidarity to his survival. He shows his uniform.