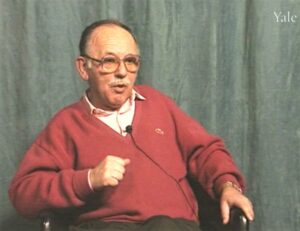 Theo Zilbergberg was born in Kovel, Poland (presently Ukraine) in 1923, the younger of two siblings. He recounts moving to Brussels in 1929; attending public school; cordial relations with non-Jews; learning tailoring from his father after completing high school; German invasion; fleeing to Revel; delivering to customers in Toulouse; briefly being drafted into the French army in Bressuire; returning to Brussels; anti-Jewish restrictions; briefly hiding; deportation to Malines in August 1942; transport the next day to Cosel, Ottmuth, then Klein Mangersdorf; slave labor constructing roads; keeping a journal; encountering French prisoners of war; transfer to Babitz in December; pervasive death; receiving extra food from kitchen workers; hospitalization; transfer to another camp; recovering with help from two French-Jewish prisoner doctors; transfer to Gross Sarne, then Ludwigsdorf in March 1943; slave labor in a munitions factory and unloading coal; a German civilian worker leaving him extra food; a weekly assignment burying the dead; transfer to Faulbrück, then Reichenbach (Sportschule) and Langenbielau; finding cheese at a nearby farm and sharing it with others; transfer to Gross-Rosen in November 1944; confiscation of his journal; a public hanging; train transfer to Hersbruck; hospitalization; a death march to Dachau; identifying himself as a Belgian non-Jew resulting in better conditions and receiving Red Cross packages; liberation by United States troops; repatriation to Brussels via Liège; reunion with his sister (she had been in hiding); recuperating in Andenne; starting a business with another survivor; and marriage in 1953. Mr. Z. discusses learning his parents had both been deported and did not survive; the camp hierarchies; the importance of the hope of seeing his father and help from others to his survival; continuing belief in God despite being assimilated; non-deportees not believing what he had experienced; sharing his experiences with his wife and children; continuing nightmares and hostility toward Germans and Poles.