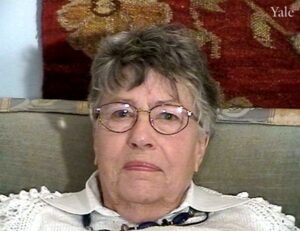 Régine Beer was born in Amsterdam, Netherlands in 1920. She recounts moving to Antwerp when she was eleven months; living in a non-Jewish neighborhood; no one knowing her family was Jewish; German invasion; registering as a Jew (no one else in her family did); an official offering to help her; being baptized as a result; working informally for the resistance; her position as a governess in Brasschaat; deportation to Malines in 1943; her mother and sister visiting; transfer to Auschwitz in May 1944; slave labor digging trenches and other jobs; observing a woman give birth (the baby died shortly thereafter); sabotaging her work in a factory; several hospitalizations; a death march to Ravensbrück, then Malchow; liberation from a death march; assistance from French prisoners, including her future husband; returning home to her family; marriage; the births of two children; her husband's suicide; remarriage; and the birth of her third child. Ms. B. discusses her state of mind in the camps; the oppressive filth; not sharing her experiences with her children, wanting to spare them; her emotional problems resulting from her experiences; recently speaking at schools; writing a book, and leadership of a survivor organization.