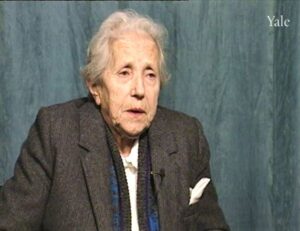 Leica Beigler was born in Kishinev, Russia (presently Chișinău, Moldova) in 1906. She recounts visiting her uncle in prison in Saint Petersburg; attending secular and Bundist schools; her sister's emigration to Paris; Kishinev becoming part of Romania; emigration to Paris in 1929; expulsion due to leftist activities; illegally living in Brussels; marriage; becoming a citizen; birth of a son and daughter; German invasion; placing her daughter in a convent and her son in a health care facility; working for the Resistance hiding children; visiting her children once a month; her husband's arrest and deportation (he did not return); sleeping in different locations every night; arrest in 1944; deportation to Malines, then Auschwitz/Birkenau; slave labor; a death march to Landsberg; liberation; finding her sister in Paris; and learning her brother had survived in the Soviet military (her mother had perished). Ms. B. discusses numbing herself in the camps; health problems resulting from her experiences; and living for her children and her political goals.