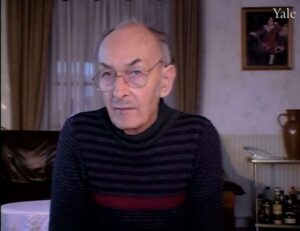 Marcel Belgeonne was born in Thy-le-Château, Belgium in 1926, the third of five children. He recounts attending Catholic school; German invasion; fleeing to Avesnes, France; living several months in Ardèche; returning home; working in a monastery; his arrest with thirteen other suspected Resistance members at the monastery; incarceration in Charleroi prison; deportation to a camp; transfer to Blumenthal; separation of Jewish prisoners; forced labor in a submarine factory; brutal beatings and humiliations by kapos; public hanging of two Polish saboteurs; praying frequently; writing to his brother; a death march to Neuengamme; train transfer to Lübeck; transport on prison ships to Neustadt; Allied bombings; liberation; prisoners taking revenge on a kapo; assistance from the Red Cross; hospitalization; returning home; reunion with his family; marriage in 1951; and his daughter's birth. Mr. B. notes maintaining his faith while in the camps; the difficulty of sharing his experiences with his family; nightmares; and visiting Neuengamme with other survivors in 1985.