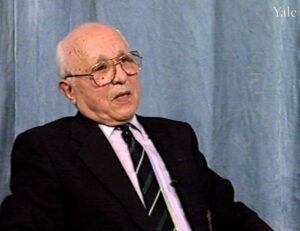 Pierre Belen was born in Brussels, Belgium, in 1916. He recalls disenchantment with Rex, an extreme rightist political movement; marriage and birth of a daughter; military service; returning to Brussels when his regiment surrendered in May 1940; forming a Resistance unit; arrest; imprisonment in St. Gilles, Essen, Bochum, and Hameln; Allied bombings; praying to maintain his morale; prisoner discussions of food and recipes due to their hunger; transfer to Esterwegen, then Blechhammer, where he observed Jewish prisoners; Allied bombings; a trial in Gross-Strehlitz; transfer to Laband; sabotaging production in a munitions factory; making a radio for the camp underground; a death march, then train transport to Buchenwald; hospitalization for pneumonia; a Dutch nurse saving him; evacuation to Theresienstadt; liberation by the Czech Red Cross; hospitalization by the French Red Cross in Plzeň, then Lyon; repatriation via Paris; and reunion with his family. Mr B. disscusses relations between prisoner groups; the importance of his friends; efforts to raise morale; the ability of humans to withstand trauma; witnessing cannibalism; the deaths of many friends; long term psychological effects; and not sharing his experiences with his children.