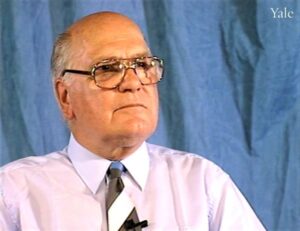 Philip Claes was born in Malines, Belgium in 1923. He recalls joining the Resistance in school at age eighteen; receiving weapons instruction; arrest in June 1942; imprisonment in Antwerp, Saint-Gilles, and Essen as a "Nacht und Nebel" political prisoner; transfer to Bochum; forced labor; transfer to Esterwegen a year later; help from Belgian physicians in the infirmary; a brief transfer to Sachsenhausen; a public hanging; choosing not to escape in Berlin, during transfer to Natzweiler-Struthof in 1944, because he had no documents; assistance from friends when he was too weak to work; evacuation to Dachau in June 1944; hospitalization; a Paris physician protecting him; the stress of assignments handling corpses; liberation by United States troops; Allied soldiers and prisoners shooting Germans for revenge; returning to Belgium; reunion with his family; and marriage to a Belgian camp survivor. Mr. C. discusses the importance of luck to his survival; forgiving the man who betrayed him under torture; solidarity among Belgian political prisoners; claustrophobia and nightmares resulting from his experiences; and years of attempting to suppress wartime memories. He shows photographs and documents.