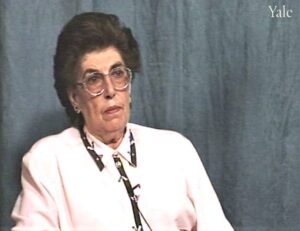 Mathilde Cohen was born in Rhodes (then Italy) in 1927. She recalls learning fascist ideology; her sister's emigration to the Congo in 1939; many other Jews leaving; deportation with her family by boat to Piraeus, then by train from Athens to Auschwitz/Birkenau; separation from her family; the shock of learning of the gassings; occasionally seeing her brother; difficulties with veteran prisoners and communication (they did not speak Yiddish); learning her brother had been killed; transfers to Landsberg, Kaufering, and Bergen-Belsen; slave labor; liberation by British troops; poor treatment by the British; assistance from Italian POWs; living in Celle; transport to Rome; assistance from a Rhodian family; living in the Belgian Congo; and moving to Belgium in 1961 when tensions increased. Ms. C. discusses reluctance to share her experiences, even with her children; solidarity with other Rhodians in concentration camp; nightmares; and recently visiting Auschwitz.