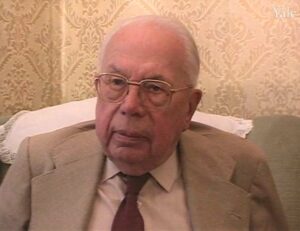 Georges Colpaert  was born in Brussels, Belgium in 1909, an only child. He recounts attending school and becoming an accountant in Schaerbeek; marriage in 1934; working as an accountant; military draft eight months prior to German invasion; capture and immediate escape; forming a resistance unit with several others; observing round-ups of Jews; arrest in March 1942; imprisonment in St. Gilles; deportation eight months later to Bochum; forced factory labor; prisoners organizing cultural activities; transfer to Hameln; helping a priest organize clandestine masses despite his own atheism; transfer to Gross Strehlitz; constructing barracks and the kitchen (they built in a method to clandestinely obtain potatoes from storage); sabotaging the work when he could; giving his cigarette rations to a friend; slave labor in an armaments factory; conflicts with an English POW; transfer to Laband; a death march to Buchenwald; slave labor clearing bombing rubble; contracting dysentery; a French doctor saving him from selection; a death march and train transport to Theresienstadt; liberation by Soviet troops; hospitalization; repatriation; reunion with his wife; and his son's birth. Mr. C. discusses camp hierarchies and relationships between prisoner groups; dehumanization; sharing his experiences with his wife, but not his son; and obtaining benefits as a political prisoner.