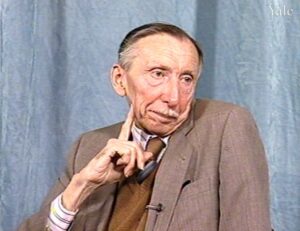 Maurice Dehousse was born in Herstal, Belgium in 1920. He recalls a happy childhood; moving to Brussels in about 1927; attending university; German invasion; traveling to Bredene, intending to enlist; returning to Brussels; continuing university; joining the Resistance; distributing Resistance newspapers; directing a group in Mons; traveling to Liège; arrest; incarceration in St. Gilles in October 1941; torture during interrogations (he suffers from the consequences to the present time); transfer in January 1942 to a prison in Germany, in September to Bochum, and in 1943 to Hameln; forced labor; transfer in February 1944 to Esterwegen; transfer to Graz prison, then Dachau; assignment to the Ã¢â‚¬Å“Nacht und NebelÃ¢â‚¬ï¿½ barrack; a fellow prisoner hiding him in the infirmary for more than two months so he would not be selected; transfer to Kaufbeuren, then Allach; being chosen as a member of the international prisoner committee that liberated Allach; the arrival of United States troops; returning to Brussels; reunion with his family; assistance from the Red Cross; continuing his education; and his career as an academic and scientist. Mr. D. discusses the camp prisoner hierarchy; the physical and psychic impact of starvation; not knowing the person he was in 1938; and reluctance to share details of his experiences with his children.