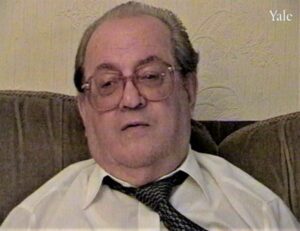 Andre Delfosse was born in Ombret-Rawsa, Belgium in 1922, the oldest of three children. He recounts moving to Vierset-Barse at age ten; leaving school at age fourteen to help support his family; active participation in a socialist group; German invasion on May 10, 1940; mobilization with his brother; his family joining them; briefly fleeing to France; secretly joining the Communist party; recruiting members, disturbing Rexist meetings, writing and distributing pamphlets, posting anti-Nazi graffiti, and armed attacks for the resistance; hiding using false papers in 1943; arrest with his brother, fiancee, and colleagues in September 1944; imprisonment in Liège; deportation to Neuengamme; constant fear; frequent beatings; transfer to Misburg; slave labor in a factory; transfer back to Neuengamme, then Meppen; his brother contracting dysentery; digging trenches; transfer back to Neuengamme in December; his brother's death; transfer to Hamburg; severe depression due to his brother's death; transfer to Sandbostel; observing cannibalism; a Belgian prisoner of war sharing food with him; an unsuccessful Soviet POW uprising; contracting typhus; liberation by British troops; hospitalization; repatriation; reunion with his parents; marriage in 1950; and the birth of his son. Mr. D. discusses the camp hierarchy and homosexuality; testifying at war crimes trials; guilt over his brother's death; leaving a memorial for him at Neuengamme; his son arranging a meeting with his liberators; and his sense that he can never be happy again due to his experiences.