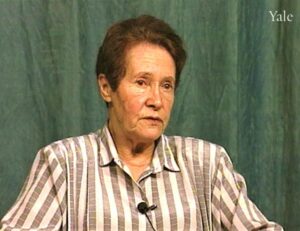 Martha Deutsch was born in Sátoraljaújhely, Hungary in 1923, the second of four daughters. She recalls her family's poverty; leaving school in 1937; German invasion in March 1944; ghettoization; the disappearance of one sister; deportation with her family in May to Auschwitz/Birkenau; separation from her parents (she never saw them again); she and her sisters remaining together; transfer to Bergen-Belsen in the fall; an SS woman assisting her care for her sick sister; transfer to Braunschweig in December; slave labor clearing bombing rubble; starvation, illness, and lice infestation; becoming inured to pervasive deaths and corpses; Wehrmacht guards allowing them to find extra food; transfer in December to Beendorf; slave labor in an underground factory; separation from one sister during train evacuation (she did not survive); transfer to Langenhorn, then two weeks later to Altona; evacuation by the Swedish Red Cross to Denmark, then Sweden (her sister was too ill to come); hospitalization for two years; attempts to verify her sister was alive; hearing from her fourteen months later; joining an aunt in Belgium in 1947; marriage; and the births of three children. Ms. D. discusses the importance of being with her sisters to her survival; struggling with depression due to her experiences; not sharing them with anyone, including her husband and children; visiting her sister in Romania and her hometown in 1960; and knowing there is much she does not remember.