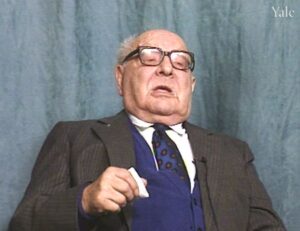 Hersz Dombrowicz was born in Częstochowa, Poland in 1908. He recalls attending a German school; moving to Belgium with his parents in 1926; working as a painter in Jette; marriage; his daughter's birth; his parents' deportation; taking his daughter to be hidden in the countryside; denunciation by a neighbor; deportation with his wife to Malines, then Auschwitz/Birkenau; immediate separation from her (she was gassed); transfer to Jaworzno; obtaining information for the camp resistance through his privileged position; public hanging of ten men who had attempted an escape through a tunnel; liberation by Soviet troops; repatriation; reclaiming his daughter in Arlon; and marriage to a woman whose husband was killed in the camps. Mr. D. notes still having nightmares about the camps.