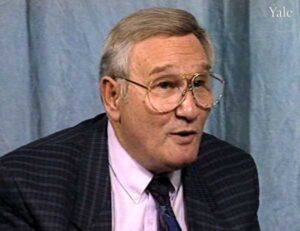 Chil Elberg was born in Poland in 1924, one of two children. He recounts his family traveling to Palestine in 1925, but staying in Belgium when his mother was hospitalized for two years; living in La Calamine, then Brussels; active participation in the Jewish Scouts; German invasion; joining the Resistance; round-up in 1942 to Breendonk, then Malines; deportation to Sakrau; transfer to Anhalt, Myslowice (Fürstengrube), Graslitz, Reichenbach, Faulbrück, Annaberg, Birkenau, Niederorschel, then Langenstein; various slave labor assignments including in a mine, a quarry, an airplane factory, a Krupp factory, and collecting corpses; beatings resulting in permanent injuries; prisoners helping him; a few guards providing extra food and easier work; observing cannibalism; escaping from a death march in spring 1945; assistance from local civilians; liberation by United States troops; returning to Belgium; and reunion with his sister (his parents had been deported and killed). Mr. E. discusses his determination to survive; the pain of seeing his friends killed in front of him; growing accustomed to death in the camps; maintaining his belief in God but not organized religion; continuing fears and nightmares resulting from his experiences; participating in survivor organizations; and a painful visit to Birkenau twenty-five years ago.