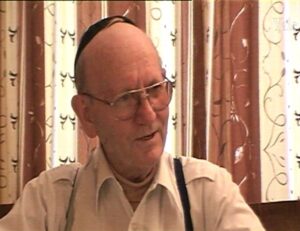 Erne Elias was born in Valea lui Mihai, Romania in 1928, the fourth of six children and only son. He recounts his family's orthodoxy; attending Jewish and public schools; his mother's death weeks before his bar mitzvah; participating in Mizrahi; Hungarian occupation in 1940; anti-Jewish restrictions including weekly forced labor; German invasion in April 1944; round-up to the synagogue; deportation with his family to the Oradea ghetto, then two weeks later to Auschwitz/Birkenau; separation with his father from his sisters; his father telling him to volunteer as a carpenter (he never saw him again); transfer to Buchenwald days later; housing in a tent camp with others from his town; transfer a week later to Tröglitz; slave labor in a factory, then as a plumber and carpenter; Allied bombings; praying with others on Yom Kippur; transfer to Berga; the wife of a camp officer giving him extra food; volunteering to return to Buchenwald to be with a friend; hospitalization for three weeks; train transport in open boxcars; escaping during a bombing; recapture; a death march to Litoměřice, then Theresienstadt; Czechs giving them food en route; a severe beating; his friends caring for him; liberation by Soviet troops; hospitalization; traveling to Budapest; assistance from the Joint; returning home; recovering family belongings; reunion with two sisters; their departures; moving to the Rothschild Hospital displaced persons camp in Vienna; training as a mechanic in a Joint camp in Germany; emigration to Belgium in 1953; and marriage to a survivor in 1955. Mr. E. discusses not losing hope in the camps until the beating in Theresienstadt; never losing his belief in God; not sharing his experiences with his children; and nightmares that eventually ceased.