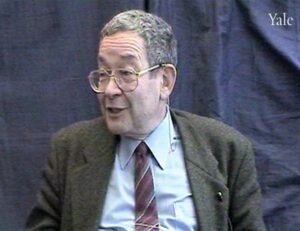 Janos Frühling was born in Budapest, Hungary in 1937. He recounts his parents' divorce in 1939; living with his mother, a violinist; frequent visits from his father; a normal life, despite anti-Jewish restrictions; spending summers and Jewish holidays with his maternal grandparents and great-grandparents in Karcag; his uncle's draft into a Hungarian slave labor battalion in 1942 (they never saw him again); German invasion in March 1944; moving with his mother to his grandparents' home; their eviction; all of them living with his great-grandparents; ghettoization; non-Jews bringing them food; transfer to Szolnok six weeks later, a week later to Vienna, via Strasshof, then to a factory in Raasdorf; relatively humane conditions; celebrating Jewish holidays; his grandfather's appointment as head of the Jewish prisoners (there were Italians, Ukrainians and other nationalities); his mother giving him her meat ration; an office worker giving him sweets; assignment with the other children to collect coal dropped from freight trains; his grandmother's brief hospitalization in Vienna, where she heard rumors of extermination camps; abandonment by the German guards; liberation by Soviet troops; returning to Budapest; reunion with his father and other relatives; he and his mother living with his grandparents in Karcag from November 1945 to April 1946; all of them moving to Budapest; his father's emigration to Austria in 1949; his mother's remarriage; participating in student protests leading to the 1956 uprising; moving to Vienna; graduating from medical school; marriage to a Belgian; and emigration to Belgium. Mr. F. discusses relations between prisoner groups, and the importance of his mother to his survival and luck to the survival of his family.