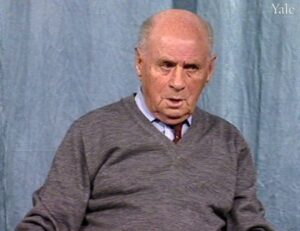 Gerson was born in 1913 in Poland. He recalls his parents' deaths in 1920; emigration to Antwerp, Belgium in 1929; hearing Léon Degrelle speak in Antwerp; fighting fascism in Spain until 1938; returning to Belgium; traveling to Cuba in 1939; returning to Belgium via England in April 1940; fleeing to France when Belgian police notified him he would be arrested by Germans; working in coal mines; arrest in Lyon in autumn 1941; imprisonment; release under police control; re-arrest; forced labor; transfer to Drancy in August 1942; deportation the day after; and selection for transfer to Annaberg. Mr. F. details relations between deportees and Jewish prisoners of war (Palestine Brigade) in Blechhammer; the prisoners' musical play in Pieskretscham; religious Jews praying and refusing food on Yom Kippur; the importance to survival of good morale and mutual aid; prisoner solidarity in Jawischowitz and Buchenwald; the death march from Thuringia to Buchenwald; liberation by United States troops in April 1945; returning to Belgium; and hospitalization until September 1946. Mr. F. discusses hardships in the camps; nightmares; and his desire to forget, yet sharing his experiences with his children, particularly one son who is recording his life story.