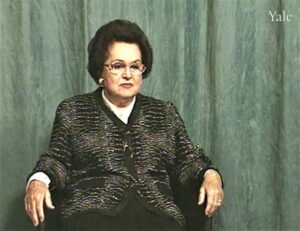 Elisa Franco was born in Rhodes, Italy (presently Greece) in 1927, the youngest of six children. She recounts her happy childhood; attending a Jewish, then an Italian school; moving to Kos in 1942; her father's leadership role in the Jewish community; anti-Jewish legislation; her mother's death; two brothers' emigrations; her father warning Jews to leave; his emigration to Turkey (her sister lived there); German invasion; fleeing to the countryside with her brother and his family; round-up and deportation to Greece; meeting two aunts; the Turkish consul having her brother and his family freed because her brother's wife was Turkish; deportation to Auschwitz; separation from her aunts (she never saw them again); meaningless slave labor; transfer to Wilischtal; slave labor in a munitions factory; public hangings; a severe beating for taking potatoes, from which she still suffers pain; transfer to Theresienstadt; assistance from the Red Cross; liberation by Soviet troops; traveling to Vienna; United States troops smuggling them to Rome; assistance from UNRRA; contact with her brother; joining him in the Congo via Lisbon; marriage to a Greek survivor in 1946; the births of her children; and returning to Europe in 1960. Ms. F. discusses becoming inured to death in the camps; relations among nationalities; some prisoners fasting on Yom Kippur; being disadvantaged by not speaking Yiddish, German, or Polish; postwar difficulty adjusting to “normal” life; pervasive painful memories and nightmares; books written by her and her father; and visiting Rhodes in 1966.