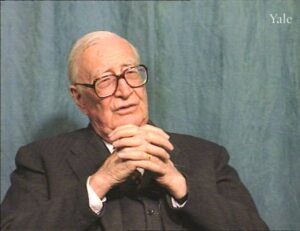 Michel was born in Belgium in 1912. He recalls his father's death; living with his grandparents; completing medical school in 1929; military service; observing many Nazi emblems when visiting Munich in 1932; doing research at the university in Liège; military recall during German invasion; being taken prisoner; caring for the wounded; release; involvement with the Resistance; assisting English soldiers to escape; arrest in September 1941; incarceration in St. Gilles; transfer to prison in Germany in July; forced labor; transfer a year later to Esterwegen; a trial in Hannover; being found innocent; imprisonment in Brandenburg; hospitalization in Potsdam; transfer to Sachsenhausen; hospitalization; working there as a physician; receiving clothing from his mother; liberation by Soviet troops; continued incarceration; arrival of Belgian delegates with United States troops; repatriation; and resuming his work at the university. Dr. G. comments on the loss of solidarity of the Resistance after the war and not discussing his experiences with his wife and daughter.