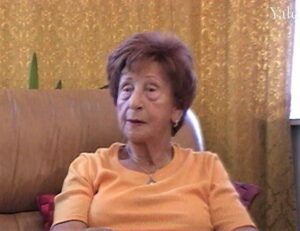 Fela who was born in Mława, Poland in 1920, the fourth of nine children. She recalls her family's orthodoxy; her father teaching at a Jewish school; antisemitic harassment in the neighborhood; attending a Jewish school; training as a seamstress; joining a sister and brother in Warsaw in 1937; German invasion in 1939; destruction of their residence by German bombing; living with an aunt; her family joining them; ghettoization; hospitalization for typhus; her older brother smuggling her mother and two sisters to be hidden in Mława; working in a factory; hiding her younger brother at her work place; his round-up when she left him home; round-up with her father and two sisters; release due to her factory job; hiding in bunkers during the ghetto uprising; deportation to Majdanek; slave labor moving stones; public hangings; transfer to Auschwitz/Birkenau; slave labor moving stones; hospitalization after three months; a friend from Mława obtaining a privileged position for her in the hospital; and improved conditions.