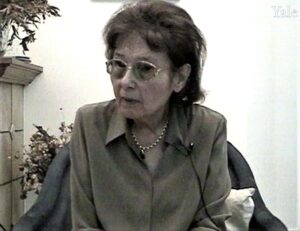 Therese Granek was born in Kłobuck, Poland in 1928, the older of two sisters. She recounts emigration to Brussels when she was three months old; attending school; German bombing and invasion in May 1940; anti-Jewish laws, including wearing the star; her parents placing her and her sister (with others from her school) in a convent in Louvain in 1942; the nuns instructing them not to reveal they were Jewish; attending mass and praying; her parents retrieving them in 1944, fearing Allied bombings in Louvain; hiding with them and her aunt in Groot-Bijgaarden (Grand Bigard); their denouncement and arrest; incarceration in Avenue Louise for a few days, then in Malines; deportation to Auschwitz/Birkenau three months later; gender separation upon arrival; remaining with her aunt after selection (she never saw her sister or mother again); several slave labor assignments; nationality tensions among groups of prisoners; crying constantly; a German soldier giving her bread when she cleaned his quarters; transfer with her aunt a few months later to Landsberg, then Türkheim; a public hanging; assignment to the kitchen; a severe beating for taking food; hospitalization for an injured foot; a death march to Dachau, then Wolfratshausen; liberation by United States troops; returning to Brussels; reunion with her father; marriage to a survivor; emigration to Israel; her daughter's birth; and returning to Belgium in 1953. Ms. G. discusses recognition by Yad Vashem of one of the nuns who hid her; the importance of her aunt's constant support to her survival; apathy following liberation; nightmares; finding Auschwitz "sanitized" during a 1970s visit with her husband; and sharing her experiences with her children. She shows photographs and documents.