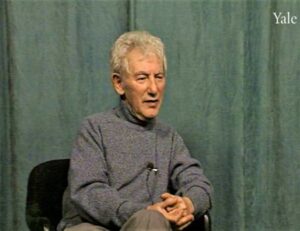 Leon Gutman was born in Berlin, Germany in 1925, one of five children. He recounts harassment by Hitler Youth; expulsion from school at age eleven due to anti-Jewish laws; attending a Jewish school until age thirteen; his bar mitzvah; learning masonry; deportation of Polish Jews; working in a Krupp factory; deportation of his older brother and two uncles; round-up en route to work in March 1943; deportation to Auschwitz; transfer to Monowitz; seeing his younger brother once; hospitalization in Auschwitz for pneumonia; transfer to Jaworzno; exchanging places with a mine worker so he could be indoors; becoming inured to corpses; Polish civilian workers occasionally giving them food; working with a civilian who always shared his lunch; a friend giving him his ration when the friend obtained extra food; receiving extra food for moving corpses; a three-week death march to Gross-Rosen; over 2,500 deaths en route; train transport to Buchenwald the following day; transfer to Altenburg; liberation by United States troops; not wanting to return to Germany after learning from the Red Cross that his immediate family were all killed and feeling Germany was his enemy; taking a convoy that terminated in Brussels; briefly living in an orphanage; training as furrier; emigrating to Israel in 1948; marriage; returning to Brussels in 1951 because he could not find employment; and the births of three daughters. Mr. G. discusses never becoming a Belgian citizen; obtaining a German passport; visiting Israel every year; nightmares resulting from his experiences; his obsession with obtaining food in camps; suing the German town that appropriated his family property; and his children encouraging him to record this testimony.