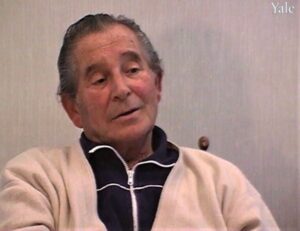 Israël Haber was born in Hamburg, Germany in 1922, one of three children of Polish émigrés. He recounts moving to Liège in 1924, then to Brussels in 1934; his very happy childhood; attending public school; his bar mitzvah; German invasion; an aborted attempt to flee south; anti-Jewish restrictions; he and his family choosing not to wear the yellow star; hiding with a non-Jewish family in Liège; his parents and siblings hiding in Brussels; attending university using false papers; his non-Jewish aunt delivering packages from his parents; denouncement; incarceration in Citadelle de Liège; transfer to Malines; a privileged position as a shower attendant due to his fluent German; convincing a camp official to release friends from deportation; one sister's arrival; arranging her escape from a deportation train; assisting those entering the deportation trains; hiding the list of deportations; liberation by British troops; walking to Vilvoorde; reunion with his family in Brussels; and providing the Malines deportation list to officials. Mr. H. discusses his parents' moving to São Paulo, Brazil, fearing a recurrence of the Holocaust; joining them; his daughter's birth; not sharing his experiences with his daughter; and visiting Malines, Auschwitz, and his grandfather's street in Kraków.