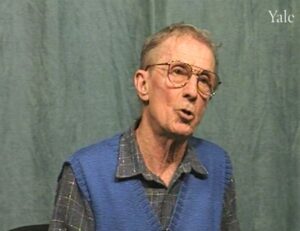 Albert Henrion was born in 1920 near Liège, Belgium, an only child. He recounts that his grandfather had been a priest but left the order; his father's union activities; German invasion in May 1940; military draft; serving in Charleroi; evacuation to Boulogne-sur-Mer; capture as a prisoner of war; release after a few weeks; marriage; his son's birth in January 1942; joining the Resistance; heading a clandestine press; hiding; living apart from his family in order not to endanger them; committing acts of sabotage; arrest in November 1943; imprisonment and torture; refusing to admit anything; transfer to Bergen-Belsen in winter 1944; harsh conditions including lice, cold, and sleep deprivation; transfer a month later to a very small camp; slave labor constructing cement blocks and digging trenches; escaping with two friends; liberation by Canadian troops days later; repatriation; and recuperating for four months. Mr. H. notes he has nightmares resulting from his experiences.