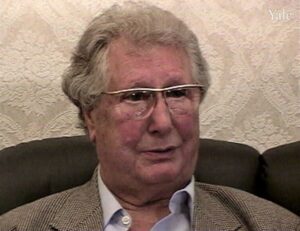 Alfred Hereng was born in Brussels, Belgium in 1919. He recounts moving to Nice after eighth grade; training as a pilot in Clermont-Ferrand; enlisting in the Belgian military in 1938; various assignments, including in Namur; German invasion; returning to his parents' home (they had returned to Belgium); hiding when Germans came for him; joining the Resistance in the Ardennes; delivering documents to a French aviator in Paris; observing Jews with yellow stars; his aunt hiding Jews; denouncement, arrest, and interrogation; transfer to prison in Arlon; being tortured; deportation to Essen/Deckenschule; friendship with a Jewish prisoner; slave labor carrying bags of cement; praying often; Allied bombings resulting in many prisoner deaths; assignment to exhuming corpses; transfer to another camp; abandonment by German guards; assistance from a German nun; liberation by United States troops; hospitalization in Recklinghausen for a month; transfer to a refugee camp; repatriation via Liège; receiving a Red Cross package en route; reunion with his parents; and joining organizations for former prisoners. Mr. H. discusses assistance from fellow prisoners; the obsession with food and viewing atrocities  in camps; recurring nightmares; visiting Essen in the 1950s (remains of the camp were being demolished); and not sharing his experiences for many years.