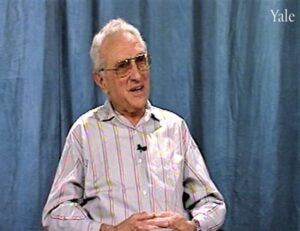 Benjamin Hermelin was born in Warsaw, Poland in 1918. He describes his family's move to Belgium; his father's successful business in Brussels; attending school in Anderlecht; German invasion; his family's arrest attempting to enter Switzerland; arrest with his wife in the Pyrenees fleeing to Spain; internment in Gurs; his release through Abbé Alexandre Glasberg; obtaining false papers; joining FTPF (the French communist underground movement); his second arrest; torture during interrogations in Limoges; transfer to Compiègne, then Buchenwald; and slave labor in Gustloffwerke I. Mr. H. recalls his decision to rely on himself, particularly as opposed to religion; communists' efforts to help each other; learning of his son's birth; transfer to Hadmersleben, then another camp; evacuation to Lovosice; liberation by Soviet troops; traveling to Sokolov via Karlovy Vary; repatriation to Brussels via Würzburg; a joyful reunion with his friends, wife, and son; and learning of the extermination camps. He notes he remained under his false name as a non-Jew in the camps; the importance of friendship to his survival; and the impossibility of resisting in the camps.