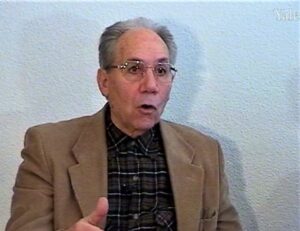 Giuseppe Odino was born in Italy in 1924. He recounts that his father fled to the United States immediately prior to his birth due to his anti-fascist activities; his return in 1928; living in Genoa; meetings of anti-fascists in their home; fascists burning his father's store; working in a factory to support his family; arrest for not reporting for weekly pre-military service; military draft; training in Genoa; German invasion; joining the Resistance; moving to Alessandria, then a mountain village; fighting Germans with the Resistance; being wounded and captured; interrogation in Voltaggio; execution of eight fellow prisoners; hospitalization; transfer to another prison; a German soldier allowing him to escape; returning, fearing reprisals against his fellow prisoners; deportation to Mauthausen in April 1944; slave labor in the quarry; transfer to Gusen; digging a tunnel at Sankt Georgen; an SS guard beating him; hospitalization; the doctor helping him remain longer to heal; slave labor in an airplane factory; sharing extra bread with fellow prisoners; sabotaging production; liberation by United States troops; working for the U.S. military; and repatriation in June. Mr. O. discusses the importance of hope and luck to his survival; persistent painful memories; not sharing his experiences; establishing a group for former Resistance members; and becoming a semi-professional cyclist.