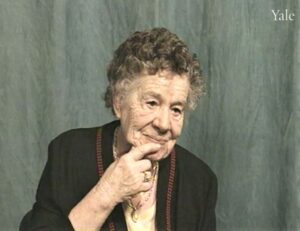 Yvonne Paradis was born in Havré, Belgium in 1912. She recounts her father becoming an invalid in World War I; completing teacher training in 1930; her father's death in 1933; marriage in 1935; moving to Antwerp in 1938; participating with her husband in anti-fascist activities; his military draft; German invasion on May 10, 1940; fleeing to Havré; her husband's return; participating in the Resistance; hiding using false papers; visiting her husband in Tertre; his arrest in December 1941 and execution in February 1942; hiding with a friend, then with an aunt in Brussels; working as a Resistance courier; arrest in January 1943; incarceration in St. Gilles; corresponding with her mother; receiving Red Cross packages; transfer to St. Leonard two months later; deportation to Mesum in March 1943; forced labor preparing food; transfer a year later to Gross Strehlitz, Hof, Donauwörth, Ravensbrück, then Aichach; liberation by United States troops; hospitalization in Heilbronn and Nancy; repatriation; living with her mother; working for an organization in Mons and Brussels helping former political prisoners; and termination for organizing a demonstration against a former collaborator in the organization. Ms. P. discusses her trial in Donauwörth when she was condemned to death; relations among prisoners, guards, and officials; continuing close friendships formed in prisons and camps; health problems resulting from her experiences; having her husband reburied in Havré next to her father's grave; and speaking at schools.