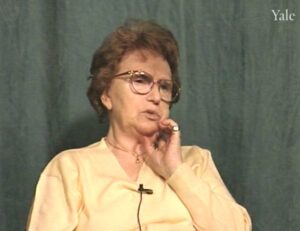 Frieda Rubinstein was born in Antwerp, Belgium in 1920, one of three children of Polish émigrés. She recounts her paternal grandmother joining them from Poland; attending public school and a Bund school (her father was a Bundist); participating in Maccabi; her father's death in 1932; leaving school to help support the family; joining the Yiddisher Arbayter Sport Klub (YASK); friendships with young German refugees through the Freie Deutsche Jugend; her fiancé emigrating to the United States in 1939; fleeing to Baisieux with his family when the war began intending to go to England; placement in Rieucros for a year; her fiancé's unsuccessful attempts to facilitate her emigration to the United States; transfer to Marseille, then an Alpine village; an unsuccessful attempt with a cousin to enter Switzerland; joining her fiancé's family in Corrèze; becoming a courier for the Francs-tireurs et partisans de la Main d'œuvre immigrée de Paris (FTP MOI); using false papers; assignment to Toulouse; helping to blow up trains; arrest; interrogations and beatings; deportation to Ravensbrück as a political prisoner three months later; remaining with four friends from FTP MOI; never admitting she was Jewish; assistance from Belgian prisoners; slave labor in a Siemens factory; hospitalization for typhus; a doctor saving her from selection; transfer to Sweden via Denmark by Swedish Red Cross busses; convalescing; repatriation to Melsbroek, Brussels, then Antwerp; reunion with her brother in Rixensart (her sister and mother did not survive); marriage to a camp survivor; and her daughter's birth in 1949. Ms. R. discusses attending an FTP MOI reunion in Toulouse; participating in a Ravensbrück survivor group; visiting there several times; sharing her experiences with her daughter; and attributing her survival to prisoner solidarity.