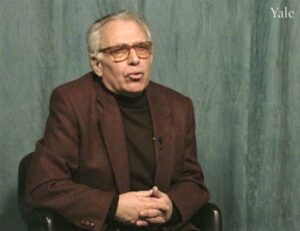 Salomon Rubinstein was born in Antwerp, Belgium in 1925, one of three children of Polish émigrés. He recounts his father's death in 1933; attending public school and weekly Yiddish lessons; participating in Hashomer Hatzair; increasing antisemitism by right-wing extremists; housing German-Jewish refugees; German invasion in May 1940; registering as Jews when required to do so; recruitment by his brother-in-law to the Resistance at age fifteen; obtaining false papers; assignments delivering underground newspapers and smuggling people to northern France via Kortrijk (Coutrai); arrest and imprisonment as a Resistant in Coutrai in December 1941; encountering his older sister and mother after their arrests (his younger sister, Freida R., had escaped to France); their release; transfer to Bruges four months later; solitary confinement for seven months; transfer to St. Gilles; encountering his mother, sister, and others from his network; their deportation to Essen; separation from his mother and sister the next day when transfered to Bochum; slave labor in a munitions factory; transfer to Esterwegen in spring 1943; solidarity among the French and Belgian prisoners; Flemish prisoners praying nightly; organizing evening lectures; hospitalization; a Belgian prisoner-doctor saving his life; transfer to Auschwitz/Birkenau a year later via several prisons, including Hamm; assignment to Monowitz; encountering a cousin from Antwerp, who had a privileged position and helped him; hospitalization by a German prisoner-nurse which saved his life; a privileged position in the garden due to his status as a long-time prisoner; and sharing food with others.